Rubik aims to be a fast, scalable and productive Web framework for Go, by composing pre-built blocks of code to fasten the development process. It offers:

Rubik has a robust/thin layer of Go's reflection (which is optional) supporting the whole framework and provide many simple high-level APIs for handling complex tasks. The directory structure of Rubik is minimal and effective.

Rubik Framework for Go is a part of "Rubik Project" which was started in light of use-cases where you want stability and speed in creating your ideas and making it to life as quick as possible. It provides with a layer of abstraction so you don't steer far away from Go's standard library and use great tools to get you started with web development in Go.

If you are new to Go and want to create a web app easily and quickly with familiar architecture as most frameworks from different languages Rubik is the best way to create your app.

No, currently it is not!. The implementation of this project is being done in such a way that you will not have to think about anything while implementing your ideas. It should feel natural just to use Blocks and inbuilt tools while working on your ideas and "Rubik is not there yet." But it is stable enough to quickly create prototypes of your ideas.

How can you help Rubik Project?

This topic holds the culmunation of guides, docs, and videos about Rubik. Since Rubik is an young project yet to set foot on production you will always have a lack of resources and places to look for Projects.

Below are some list of resources to browse through or watch:

Before you can use Rubik you need to make sure that development environment is up-to-date and ensure that everything is setup correctly. Let's go throught the requirements of Rubik first.

Rubik CLI helps you in being productive and accomplish your tasks with ease. It has some really nice advantages over normal execution that is discussed here.

Thie CLI will be downloaded and installed under $HOME/.rubik/bin folder. You need to add this path to your bash_profile or it's equivalents:

Now let's check if the installation was successful. Run:

You have just set-up your development environment like a boss. You are ready to Go!!.

In this tutorial you'll learn how to setup your Rubik project using the command-line generator and how easy it is to setup a productive environment with Rubik.

In the previous tutorial we installed okrubik a CLI for this framework, to ensure that it is installed run:

which outputs the following help text for all the commands available in Rubik.

You'll have a new directory called helloworld now and will consists of Rubik project files. Let's run the server by running:

The -a flag accepts a name of the application in our case, the default server as the argument. If you have multiple server projects under the same workspace you can do okrubik run which shows a dynamic CLI selection of the list of your Rubik servers which we will take a look at in this chapter.

Now let's visit localhost:7000. Wew! Our Rubik project is all set-up in just under a minute. This is a great start!

If you have developed your applications using the net/http package and want to use Handlers as Rubik's route controller, it can be easily migrated to Controller type in Rubik using simple conversion methods. The middlewares which are also generally http.Handler or http.HandlerFunc types can be migrated as well.

To convert a http.Handler into rubik.Controller you can use UseHandler() which accepts a Handler as an input and returns a Controller. It can be inlined during Route declaration like so.

To migrate/use your old http.HandlerFunc you can use UseHandlerFunc() which accepts a HandlerFunc and returns Controller. It can also be inlined.

Middlewares in Rubik are just Controller type. Using the above two methods you can generally use most of the Handler and HandlerFunc's designed for stdlib in your Rubik project but some middlewares has made a design choice of using intermediate handler functions such as CORS handler. To use such functions there is a helper method called UseIntermHandler() which takes in func(http.Handler) http.Handler type and returns a Rubik Controller.

Rubik comes with a lot of useful commands that makes web development easy in Go, in this chapter we are going to take a look at okrubik CLI's commands and how you can configure your workspace.

The configuration of your workspace in Rubik is done using the rubik.toml file. Let's take a look at the default Rubik configuration file.

The create command is used to create a new Rubik project. It downloads all the boilerplate code required to get a barebones version of Rubik server running. It creates a new folder with the project name provided. There are 2 ways to run this command.

gen command generates components for your Rubik projects. Currently it can generate 2 things:

The exec command runs your custom commands mentioned inside rubik.toml. As per our 1st topic, we can see this x object declaration.

This block of configuration has a [x.test] which can be run inside your workspace. Let's try it out, and add a command called foo which just writes foo to stdout.

The x is an alias for exec and you can see it outputs foo as it runs the command that is declared inside [x.foo].

In this chapter we will take a look at the components the Rubik Server is composed of. The components allow us to write code with less coupling and highly domain-driven code.

Guards are rubik.Controller that "guards" your route from potentially bad/error-prone requests. As you know that in Rubik every request is controlled/manipulated/processed by the rubik.Controller type which you can read in Section 4.5.

There is no difference between a Middleware, Core request handler and Guards are nothing different in case of function signature but the only difference is that, Guards run before Assertions.

Let's say you want to reject any request that does not have the x-rubik-client header. Let's write our guard.

Adding this guard to any of your route.

In this case myRoute will reject any client with:

for any request with x-rubik-client header being empty.

Assertions are used to validate and confirm that a value from the client/user is of the right type and meets the requirements of your business needs. E.g: email value inside body must be of the form of an email id and not any other type or structure.

When assertions fail it responds with 400 (Bad Request) with the assertion message provided by you.

Writing your own assertions:

Let's write a simple assertion to check if the integer value equates to 0 or not:

Notice the $ symbol, this is used to populate the name of the variable it is checking. As per the above example if the Threshold cannot be converted to an integer the error message will be Threshold is not an integer value.

In Rubik Middlewares are Controllers that run after your Assertions, meaning that they are just Guards that postpone their executions until your Validations are done. Let's combine Guards: Section 4.1 example and add a middleware to get to know them better.

From Guards: Section 4.1 code we have this rubik.Controller:

Add it to the myRoute with validations:

Entity in Rubik specifies the requirements for your target route to function. Specifying your requirements explicitely comes with a lot of advantages. Let's try to specify an entity.

MyEntity is a spcification of requirement of your API, which states that "my API requires name inside query to function properly."

The component lifecyle of Rubik is arranged in such a way that the more error prone and security dense components align at the top of the lifecycle. 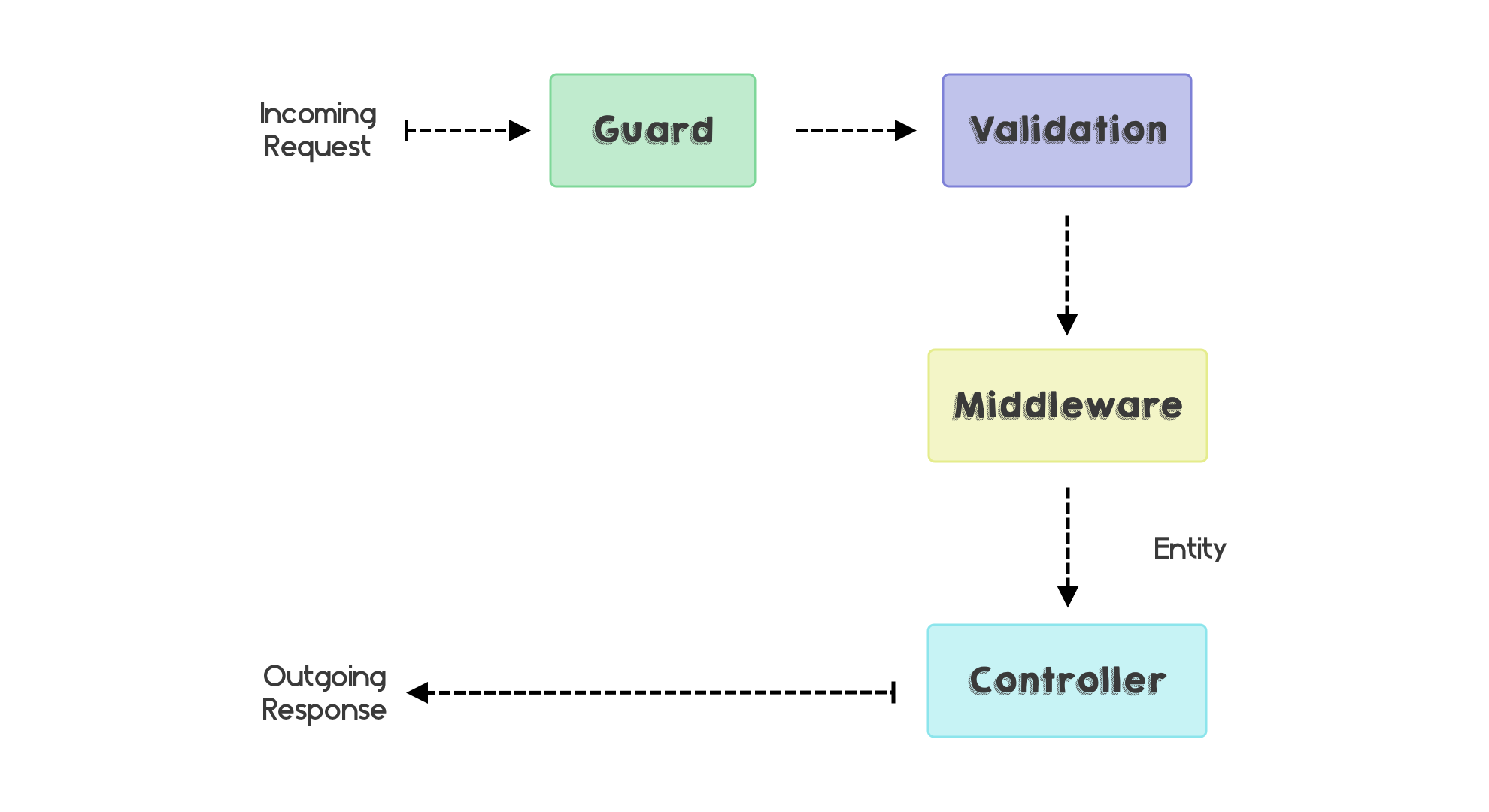 Components that are independant of the core system is called as a block. Blocks can never depend on a specific nature of the server yet provide extended functionality to your Rubik server.

It can be seen as plugin system of Rubik ecosystem, but -- it has some features that tie it to the boot sequence of the Rubik's core thereby eventually making it part of the system.

Writing a block is as simple as implementing a singl method, thet serves as the main func for your extension. A struct is considered as a Rubik Block only if you implement the OnAttach method of the rubik.Block interface.

There are 2 things that catches the eye:

!!! Note This is not the Rubik instance itself, as this would be too big a vulnerability it supplies you with only the functions that you need to build a block.

!!! Quote If the block can not even initialize properly, it can never function properly.

A block can never be known by the Rubik server until you attach it, it can be done by calling rubik.Attach inside the init method of this block file.

Considering the above example:

rubik.Attach takes in a (name string, block rubik.Block) as it's parameters.

Notice how we had initialized the block? By passing a raw string -- this can prove dangerous while developers using this block try to Get your Block for usage.

Developers can get your block while implementing their business logic from anywhere in the project. Since Rubik is a singleton instance it maintaines a map of blocks by the name that you specify.

A very good example of this type of implementation is the CORS block:

r.GetBlock() gets the Block by name, rubik knows that it's a Block (as it satisfies the Block interface) but compiler just doesn't know which one (yet ..generics please rant!!) ..

!!! Note There is no possible way that r.GetBlock returns any other Block because of the map and unique key that it it maintains. So rest assured while coercing to your Block type.

Decode decodes the internal rubik server config into the struct that you provide. It returns error if the config is not unmarshalable OR there if there is no config initialized by the given name parameter. It is useful when you really want some configs to be present for your block to work.

Config gets config by name

It is the localhost prepended current URL of your Rubik server.

type: Struct All The initialized Routes and their belongings such as Entity, Description etc.

A RouteTree is not initialized until boot sequence completes. If you want to make use of the RouteTree you can use rubik.AttachAfter() which attaches your Block after the boot sequence is complete

Rubik comes with a pretty neat extension method to create a JWT token from the jwt.MapClaims that you provide, and errors when a signature could not be made from the secret provided in config.

There are 3 types of Controllers available in this block:

This middleware controller can be used inside the rubik.Route to authenticate JWT with default key as 'token' and can override with cookie_key config so this block will look for overriden key, instead of default one

This middlware controller can be used in rubik.Route to authenticate JWT from the header. It follows the Bearer standard where you pass Bearer $TOKEN as the authorization header. It does not have any override from the config.

This middleware can be used when there is no need to throw any error to the client but want to parse the jwt.MapClaims and be available inside the rubik.Request.Claims.

Swagger block let's you add documentation and to your Rubik REST APIs and serve as a tool for people to know and interact with your server.

Add this to main.go of your rubik server

runs the ExtensionBlocks attached to your server.